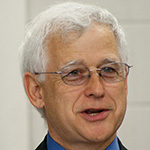 David Henderson is a Professor of Economics at the Naval Postgraduate School in Monterey, California, a Research Fellow with the Hoover Institution at Stanford University, and a Senior Fellow with the Fraser Institute in Vancouver, Canada. He was previously a senior economist for energy policy with President Reagan’s Council of Economic Advisers.

He has testified before the House Ways and Means Committee, the Senate Armed Services Committee, and the Senate Committee on Labor and Human Resources. He has also appeared on C-SPAN, CNN, the Jim Lehrer Newshour, the John Stossel show, the O’Reilly Factor, and MSNBC, NPR, CBC, and the BBC.

Born and raised in Canada, he moved to the United States in 1972 to earn his Ph.D. in economics at UCLA.
He became a U.S. citizen in April 1986