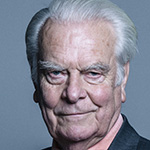 Dr. Lord Owen is a doctor by training and was neurology and psychiatric registrar at St Thomas’s Hospital, London, before becoming a Research Fellow. He then entered politics and in Labour Governments served as Navy Minister, Health Minister and Foreign Secretary. He co-founded the Social Democratic Party and was its leader from 1983-1990. From 1992-1995 he served as EU peace negotiator in the former Yugoslavia. He now sits as an independent social democrat in the House of Lords. For the last 20 years he has been in business in the UK, the Russian Federation and America.

From 1999-2005 he was Chairman of New Europe which campaigned with Business for Sterling against the UK adopting the euro. He has been a committed European all his political life but never a federalist and in the recent UK referendum he was a supporter of Vote Leave believing the EU has become dysfunctional.

Lord Owen has long been interested in the inter-relationship between politics and medicine and has written extensively on the subject including In Sickness and In Power: Illness in Heads of Government, Military and Business since 1900 (revised edition, 2016), and The Hubris Syndrome: Bush, Blair and the Intoxication of Power (revised edition, 2012). He is Chairman of the Daedalus Trust charity, which promotes multidisciplinary research into personality changes associated with the exercise and accumulation of power in all walks of life.

Other publications include his autobiography, Time to Declare (1991); Time to Declare: Second Innings (abridged and updated, 2009); Balkan Odyssey (1995); The Hidden Perspective. The Military Conversations of 1906-1914 (Haus, 2014); Europe Restructured. The Eurozone Crisis and the UK Referendum (Methuen ebook, 2015) and the UK’s In-Out Referendum: EU Foreign and Defence Policy Reform (Haus Curiosities, 2015). His latest book Cabinet’s Finest Hour. The Hidden Agenda of May 1940 and the Legacy for Cabinet Government will be published in September 2016.