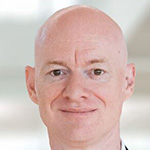 Ian Roberts has served as CTO of Bühler since 2011. During that period the company has undergone a digital transformation, developed a collaborative innovation culture, building and engaging with broad ecosystems and continued to strengthen an innovation leadership position.

A strong advocate for entrepreneurship and sustainability, he is a co-founder and president of the startup accelerator MassChallenge Switzerland, a non-for-profit accelerator that has supported more than 500 startups in six years and operated programmes across six countries. The accelerator was founded as a cross-industry partnership between Nestlé, Inartis Foundation, the Swiss Economic Forum, Givaudan, Barry Callebaut and Bühler.

He is the vice-Chairman of the board of RESTOR, a global ecology and land restoration platform spun out from the Crowther Lab at ETH Zürich and is an Ambassador for the education programme Aiducation.

Ian Roberts chaired the evaluation board of the Wyss Institute in Zürich from 2015 to 2021 funding start ups in Regenerative Medecine and Robotics. During this period more than a dozen projects were funded.

Ian Roberts, born in 1970, is a British Citizen. He has been a driving force in forming the World Food System Centre in ETH Zürich, the Integrative Food and Nutrition Centre in EPFL and in shaping the Swiss Food and Nutrition Valley. Ian Roberts has a PhD in Chemical Engineering and is a Fellow of the Institute of Chemical Engineers. He has more than 25 years in the food industry, having previously worked in a range of innovation and business development roles for Nestlé.