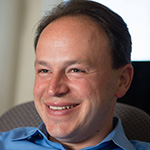 Matt Grossmann, born in Columbia, Missouri in 1979, serves as Director of the Institute for Public Policy and Social Research (IPPSR) and Associate Professor of Political Science at Michigan State University. He received his doctorate from the University of California, Berkeley.

Matt Grossmann’s books include Asymmetric Politics: Ideological Republicans and Group Interest Democrats (Oxford, 2016 co-authored with David A. Hopkins), Artists of the Possible: Governing Networks and American Policy Change Since 1945 (Oxford, 2014), and The Not-So-Special Interests: Interest Groups, Public Representation and American Governance (Stanford, 2012). He is author of numerous journal articles on topics like policy change, party networks, the legislative process and public opinion. His research appears in the Journal of Politics, Policy Studies Journal, Perspectives on Politics, and 14 other journals.

Matt Grossmann also writes for blogs at Vox and The Washington Post, publishes op-eds, and is co-author of the most popular Campaigns & Elections textbook. His research has been featured in publications like the New York Times, The Washington Post, Bloomberg or USA Today.