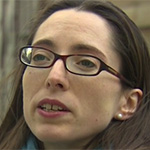 Sumption has written more than 40 articles and reports on international migration, on topics including the migration impacts of Brexit, the design of programmes for immigrant investors, the selection of highly skilled workers, the role of immigration in trade agreements and the recognition of foreign qualifications, among many others. She has conducted research for several governments and international institutions, including the World Health Organisation, the International Organisation of Migration, the World Bank, the European Commission, the UK Equality and Human Rights Commission, and the governments of Norway and Bermuda.

Sumption’s analysis has been widely cited in UK and internation-al media, including BBC, the Financial Times, the Economist, the New York Times and the Wall Street Journal.

Before joining the Migration Observatory, Sumption was Director of Research for the international programme at the Migration Policy Institute in Washington, DC. She holds a degree in Modern Languages (Russian and French) from New College, Oxford, and a Master of Public Policy from the University of Chicago. In January 2018, Sumption received an MBE for services to social science.